The first distillery to open on Islay in 127 years, Kilchoman is a farm distillery near the south west shores of Islay.

The highland distillery of Deanston is the only distillery in Scotland to be self-sufficient in electrical power.

A smoky highland malt from the maritime distillery of Old Pulteney

Bartenders from across the globe collaborated in this limited and unique annual edition .

The Singleton is not named after a distillery, but instead ...a brand from three distilleries owned by Diageo.

Victoriana is bottled in the traditional manner, straight from the cask at 54.2% abv.

The Bruichladdich distillery was not originally intended to produce Peated whisky.  However, it has recently produced two heavily peated expressions.

Gooderham & Worts distillery was founded around the time of Canada's confederation and became the largest tax payer in the country at that time!

From the far northern town of Wick, which was once the herring capital in the early 19th century.

Out of over 130 distilleries in Scotland, Laphroaig is one of seven distilleries still carrying out "Floor Maltings"

Ardbeg An Oa is named after the Mull of Oa, which offers the Kildaton coast (where Ardbeg distillery is situated) some protection from the worst weather the Atlantic has to offer. 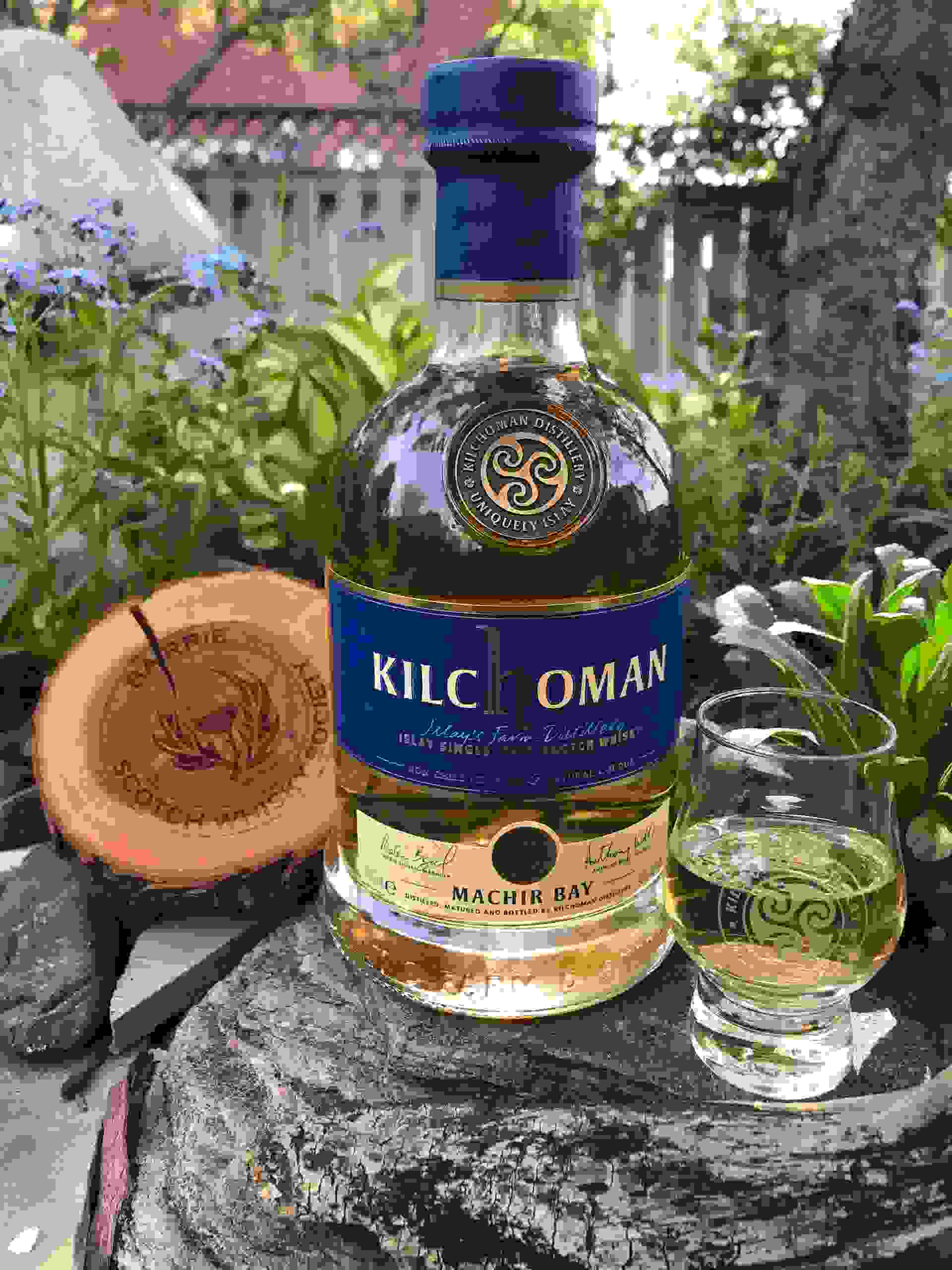 Machir Bay from the Kilchoman Distillery

As the first distillery to open on Islay in 127 years, Kilchoman is a farm distillery, growing its own Barley and carrying out the complete hand-crafted process of whisky making from grain to bottle.

Machir Bay, is a vatting of Kilchoman matured in both bourbon and sherry casks. The high proportion of bourbon barrels creates a distinct balance of classic Islay character and fresh floral complexity.

This dram pours a pale gold; the aromas immediately hit your nose with notes of smoke and brine, reminiscent of a seaside bonfire.  On the nose, you will sense integrated aromas of crisp apple, lemon peel, dried heather and some honey coming forward. On the palate, it is deliciously smooth and pleasantly warm, with a lovely marriage of sweet and smoky flavours. 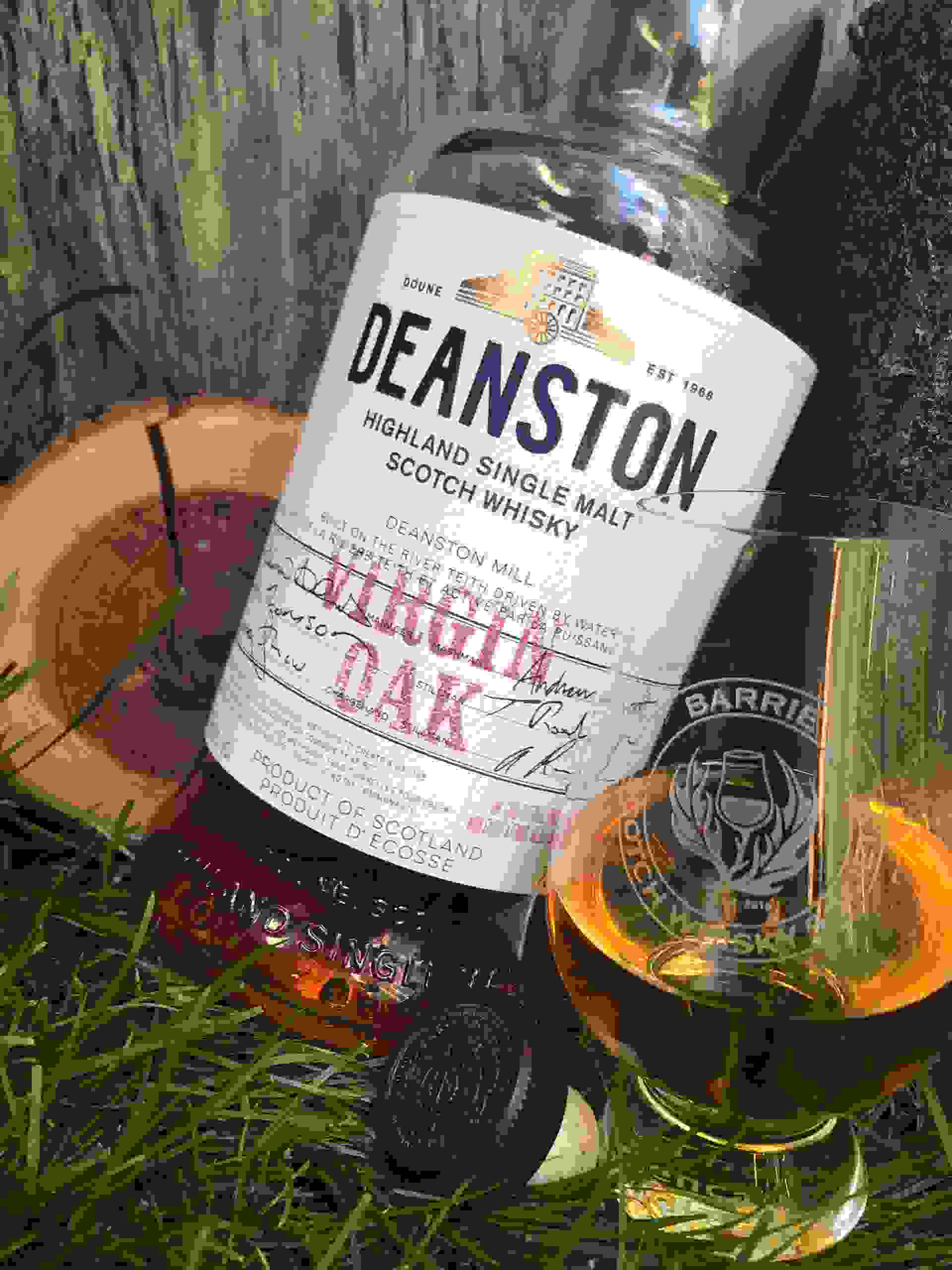 Deanston Virgin Oak … is made with young whisky (About 6 to 8 YO) which has been finished in brand new oak casks from Kentucky.

Bottled at 46.3 % alcohol, the virgin oak maturation smooths out this expression, so no need to add water, as this will dilute the delicious sweet malt flavour.

Exceptional value for this high-quality expression. Very worth while keeping a bottle in your cabinet for ether a novice guest or an enthusiast!

Deanston Distillery was initially built as a cotton mill in 1785, then transformed into a distillery in 1966. The constant supply of pure water from the River Teith was a contributing factor in the decision to turn the mill into a distillery.  Deanston is now the only distillery in Scotland to be self-sufficient in electricity, with power generated by an on-site hydro-energy facility.

Pale gold in colour; aromas of vanilla and green apple, caramel and citrus; on the palate sweet barley with crisp apple and vanilla spice followed by a lengthy finish that explodes with honey and a hint of smoke. 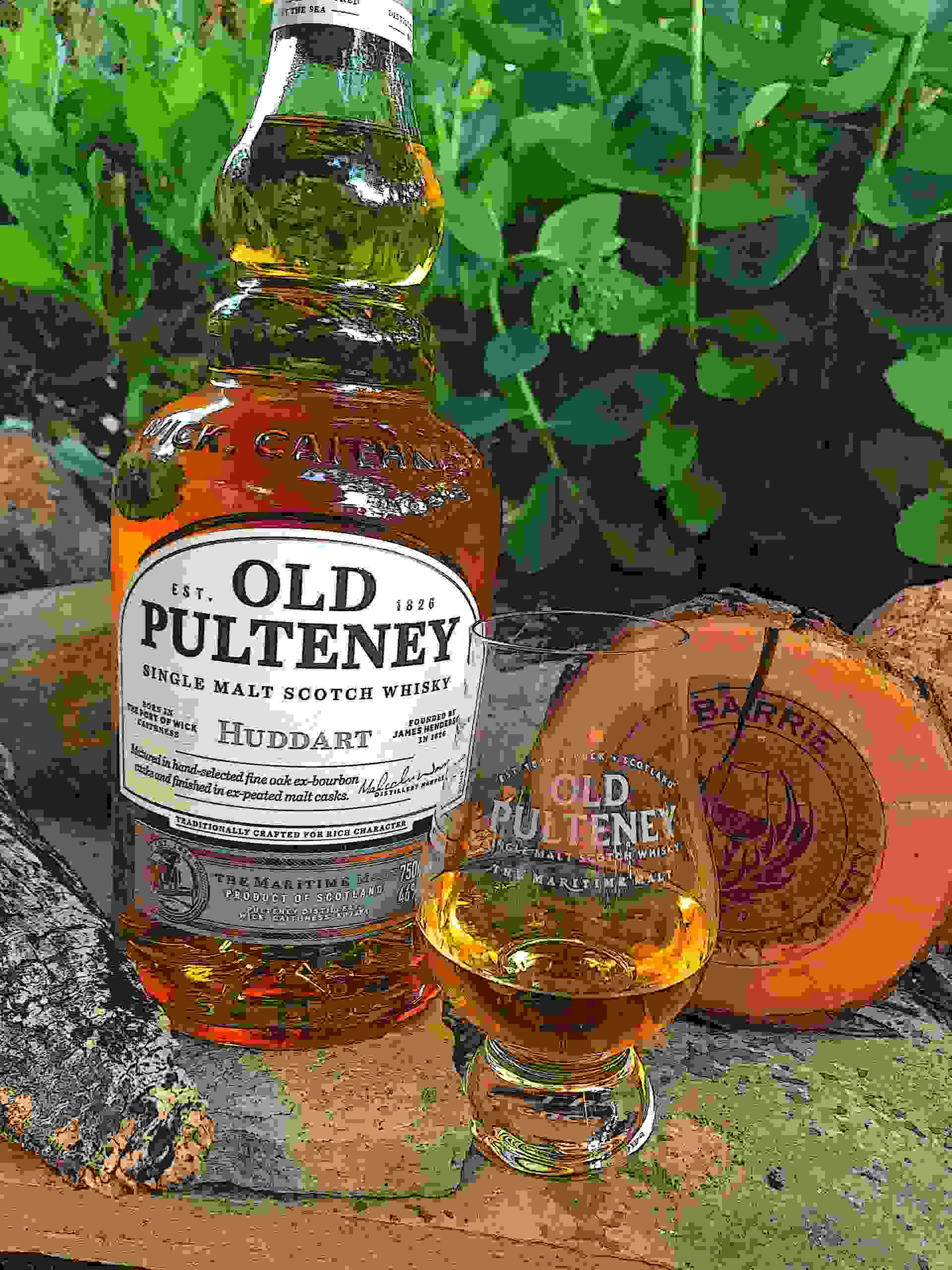 Huddart from the Old Pulteney distillery

The name for Old Pulteney – Huddart, comes from Huddart St where the Old Pulteney distillery was established in 1826, in the Port of Wick.

This dram is bursting with classic Pulteney character, accompanied with mellow smoke notes.

This Maritime Malt is matured next to the sea on the shores of Northern Scotland, in American Oak ex-bourbon casks. This non-age statement expression is then finished in “ex-peated” casks, formerly used to mature peated whisky.

Pouring a deep golden colour, this single malt delivers mellow wood smoke and burnt toffee on the nose. The palate takes on flavours of honey and green apple leading to delicious spices and smooth vanilla.  Then a lingering finish of honey and earthy malt. 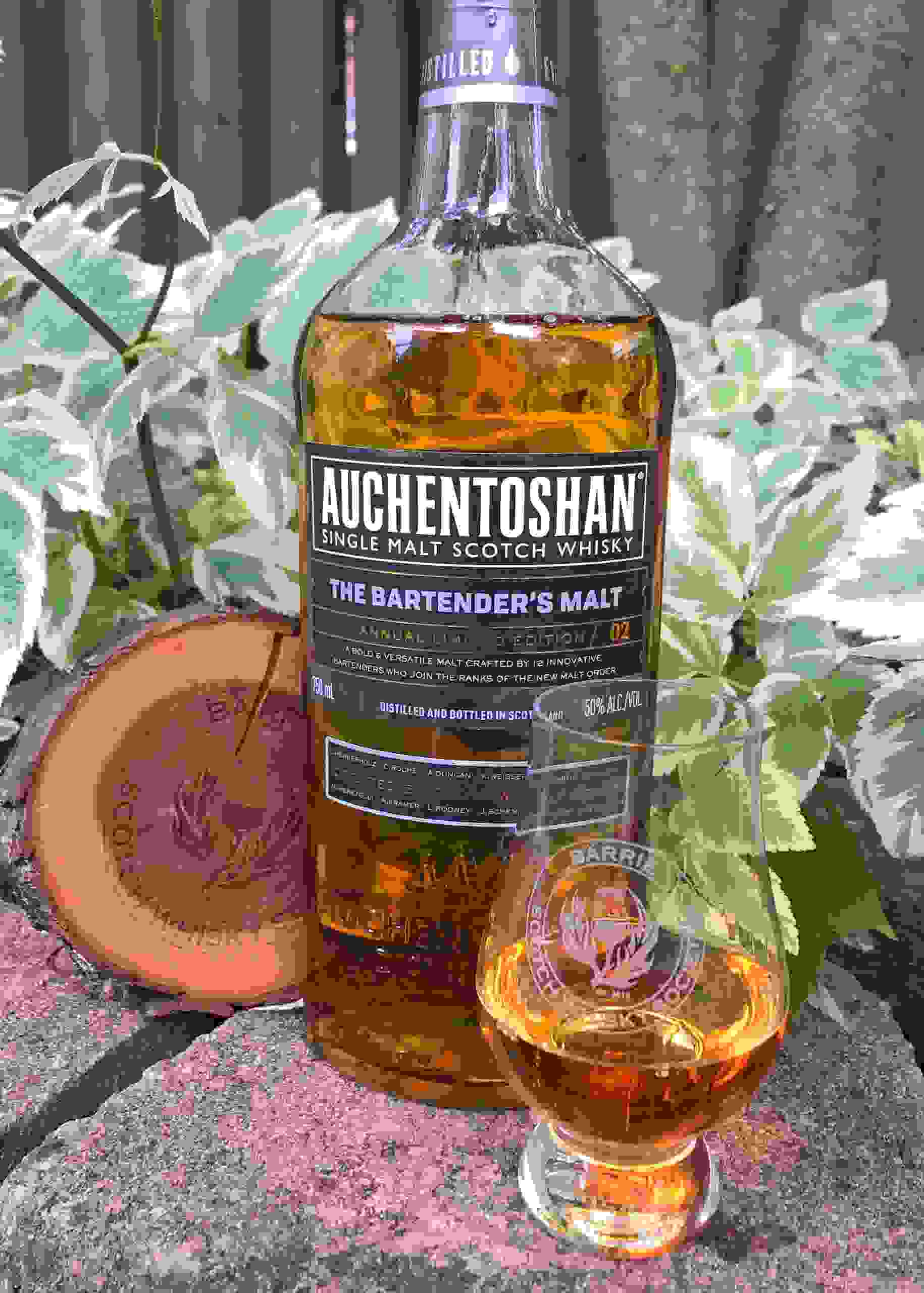 Auchentoshan Bartender's Malt No. 2 is the second time in the history of the Auchentoshan Distillery,  were bartenders from across the globe collaborated in this limited and unique annual edition. Selecting casks that reflect each of their individual personalities.

The casks selected all range in age over 5 decades. Resulting in a non-age statement single malt, matured in a diverse collection of oak casks, including American and European, as well as a variety of sherry casks, red wine barriques and German Oak.

At 50% ABV, the first taste is a big hit of complex fruity flavours with a tiny hint of smoke.

If you’re an Auchentoshan fan, this is a must-try.

Pours an amber honey gold with a glint of copper. On the nose, aromas of dried orange peel, vintage port, grenadine and cinnamon. Orange flavours, honey and black pepper tease the taste buds. Leaving you with a long-lasting warm finish of orange liqueur or brandy flavour. 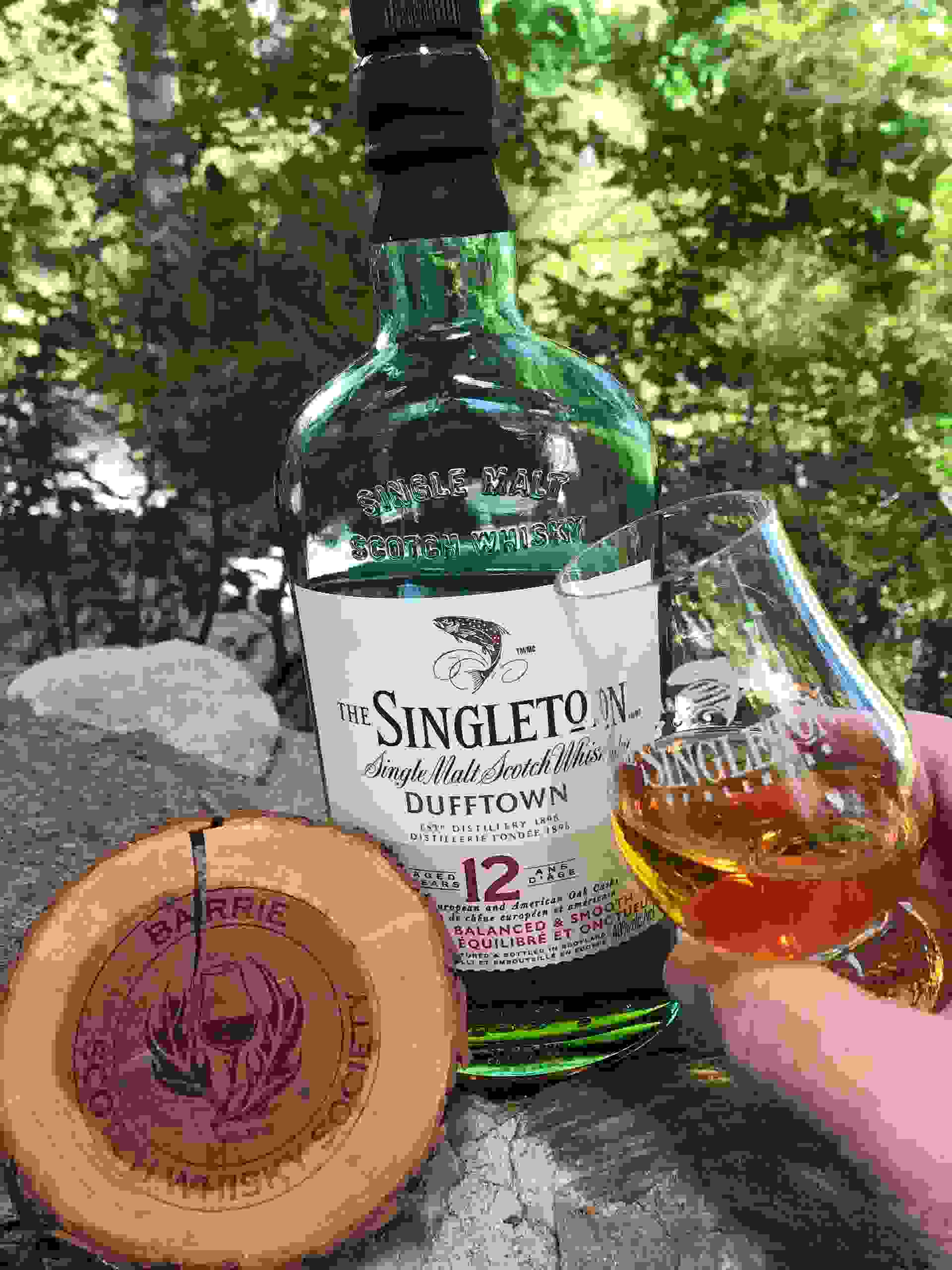 The Singleton of Dufftown

Here we feature The Singleton of “Dufftown” distillery, located in the Speyside region, (One of 5 whisky distilling regions in Scotland).

A very nice intro to Scotch Single Malt, because it is a smooth, light and malty scotch that doesn’t come across too complex.  It’s aged in a high proportion of European oak casks, which provide spicey, savoury or peppery flavours.

Pours a honey gold.  The nose on this smooth easy drinking distillate is malty and sweet with a fruity aroma. Notes of malty oak continue on the palate with hints of toffee and nutty flavours. The finish is medium to long and dry.

Reasonably priced and good value for an introduction to Single Malt Whisky. 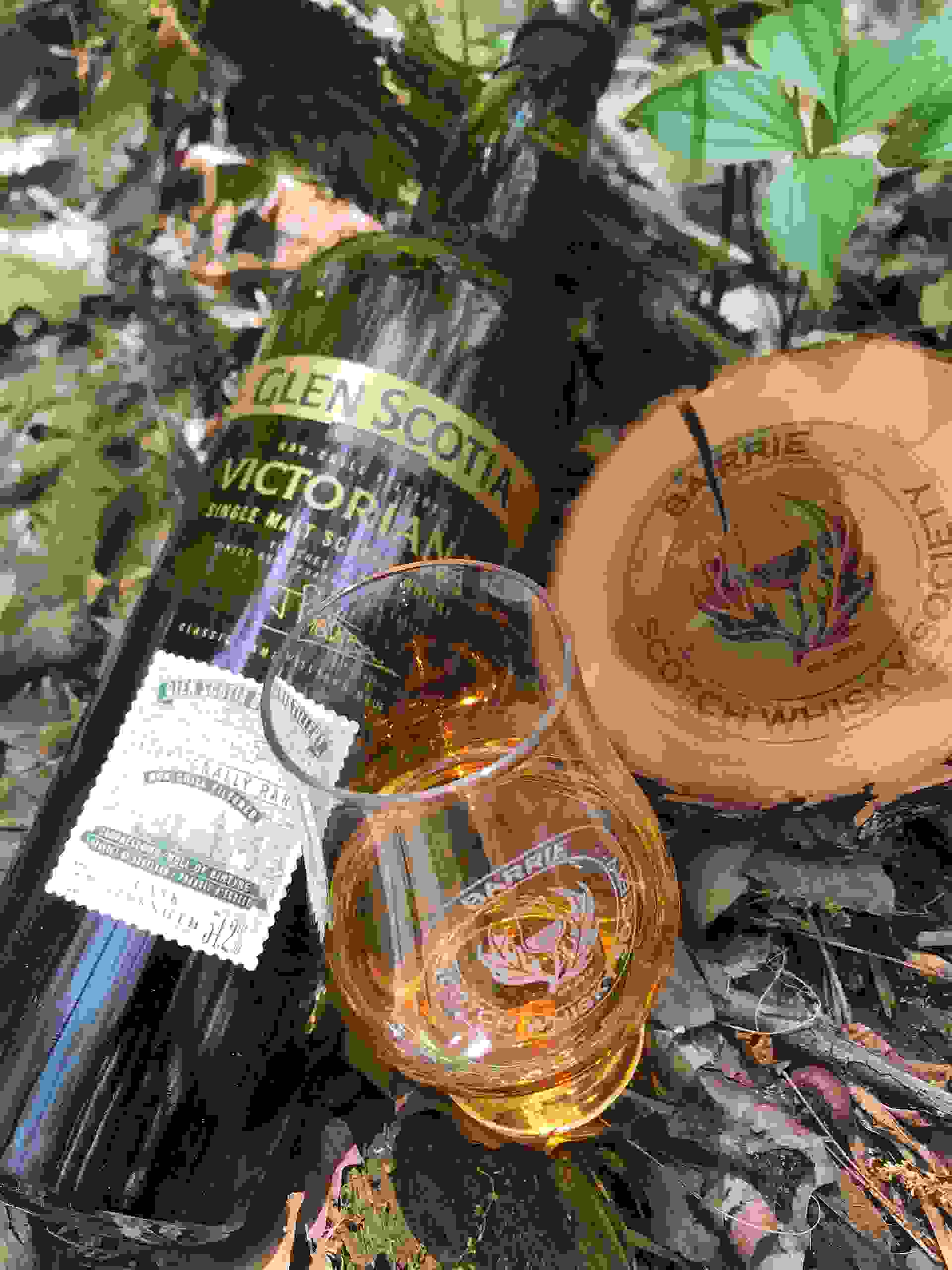 The Glen Scotia distillery, is one of three remaining distilleries established in Campbeltown, situated near the southern tip of the Kintyre peninsula, on Scotland’s western coast.

Victoriana is bottled, in the traditional manner, straight from the cask at 54.2% abv. This vintage process of bottling takes us back to when Campbeltown was the Whisky Capital of the world in the late 1900’s, with 30 distilleries.

Whisky expressions from Campbeltown are sometimes hard to find at your liquor store.  So anytime you find one, it will always be a worthwhile bottling to explore.

Finished in deep charred oak, the result is an exceptionally smooth single malt whisky, whose aroma and flavour work in harmony. Sweet, savory, mild smoky flavours all married together. 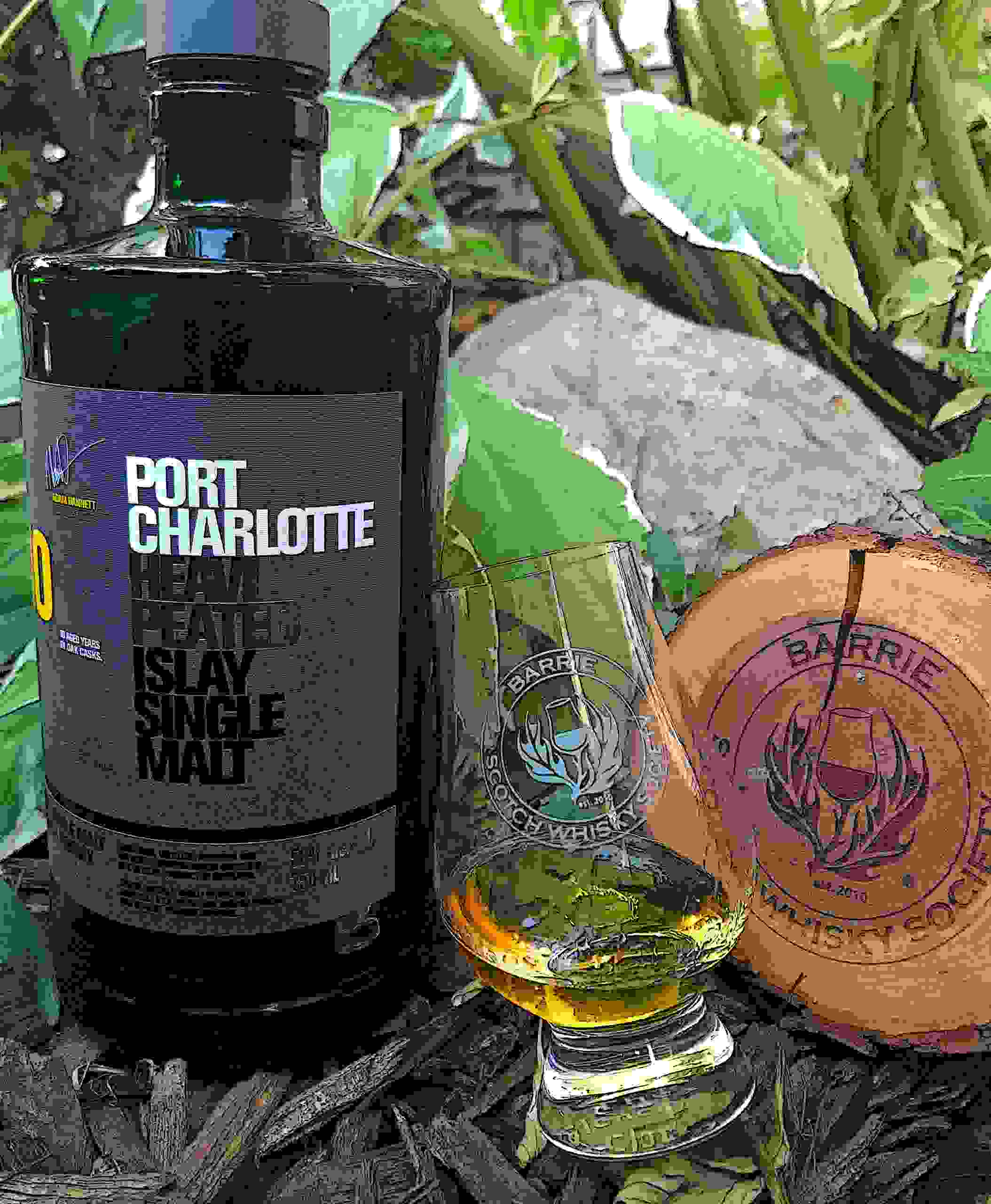 The Islay distillery of  Bruichladdich was intended to produce Non-peated whisky, which may sound unusual. The lack of smoke wasn’t as a result of any local preference, but dictated by the needs of the blending firms who had always owned the distillery.

However there are two expressions from Bruichladdich’s core range which are quite “Peated”, Port Charlotte being heavily peated and Octomore being super-heavily peated.

Pronounced 'Brook-Laddie' and meaning 'shore bank' in Gaelic, the Bruichladdich distillery was built in 1881 by the Harvey brothers on the western shore of Loch Indaal, on the Isle of Islay; making it the most westerly working distillery in Scotland, second only to Kilchoman.

Pouring a pale gold, this dram emanates bold aromas of iodine, bacon, smoke and peat. The velvety texture holds flavours of toasted walnut, pepper, bacon and malted barley. The finish resounds with a whiff of the sea. The 50% ABV in Port Charlotte hits hard at first, but the smoothness reveals itself almost immediately afterwards. 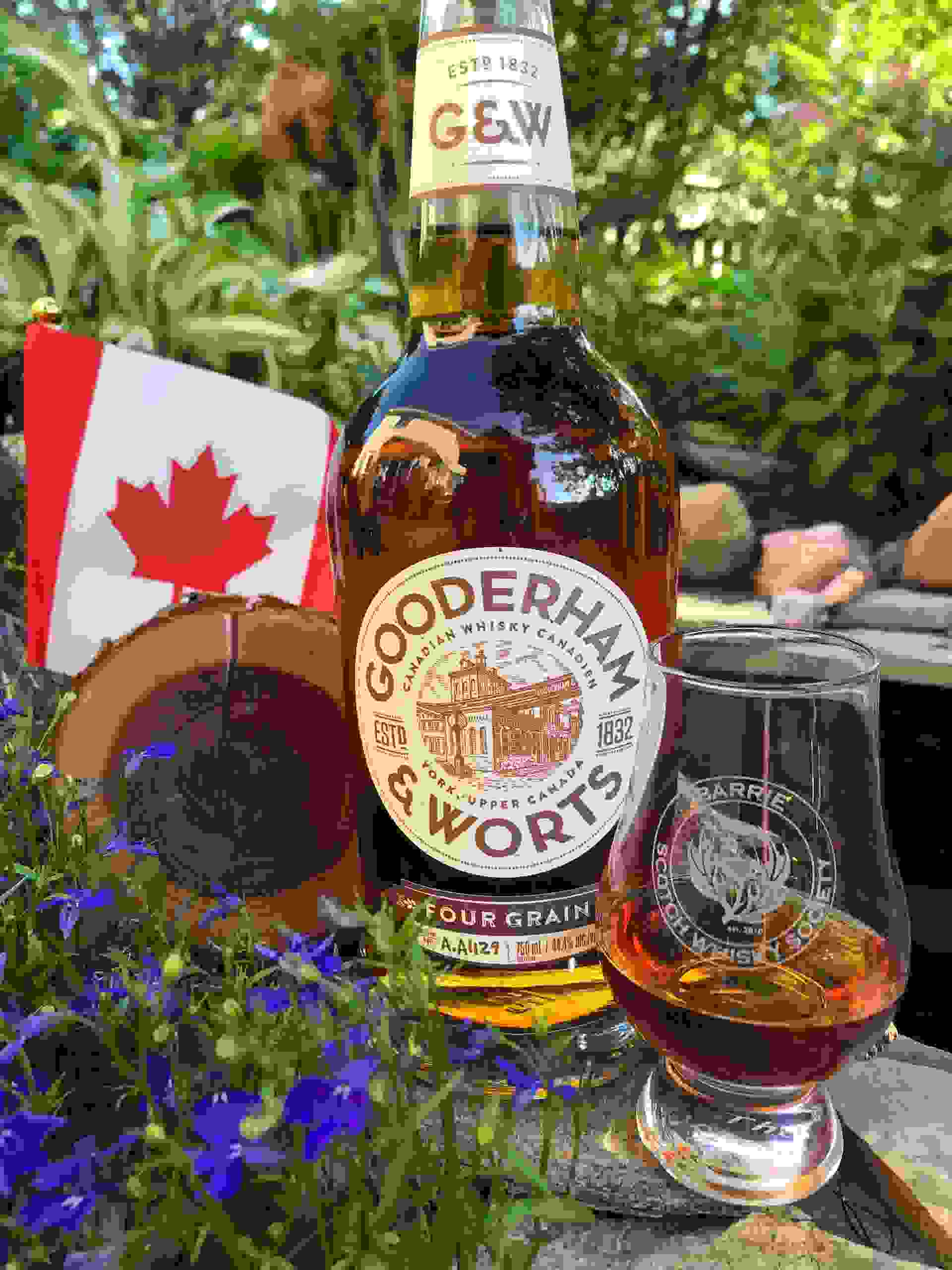 Gooderham & Worts distillery was the biggest contributor of tax revenue, leading to the confederation of Canada. This country was built on a foundation of whisky!!

Founded in 1832, Gooderham & Wort was the largest whisky distillery in the world by 1877 producing 3.5 Million gallons per year at the time.

This four grain Canadian whisky is a blend of corn, rye, wheat and barley bottled at 44.4% ABV.

This Canadian dram pours a golden/amber colour.  Nice sweetness up front, somewhat floral, and surprisingly fruity on the nose for a relatively high ABV.  The palate is rich and full with a smooth yet thick mouthfeel, filled with flavours of sweet floral and fruit.  A very nice medium/long spicy finish, with a bit of the wheat sweetness persisting for a while as well. 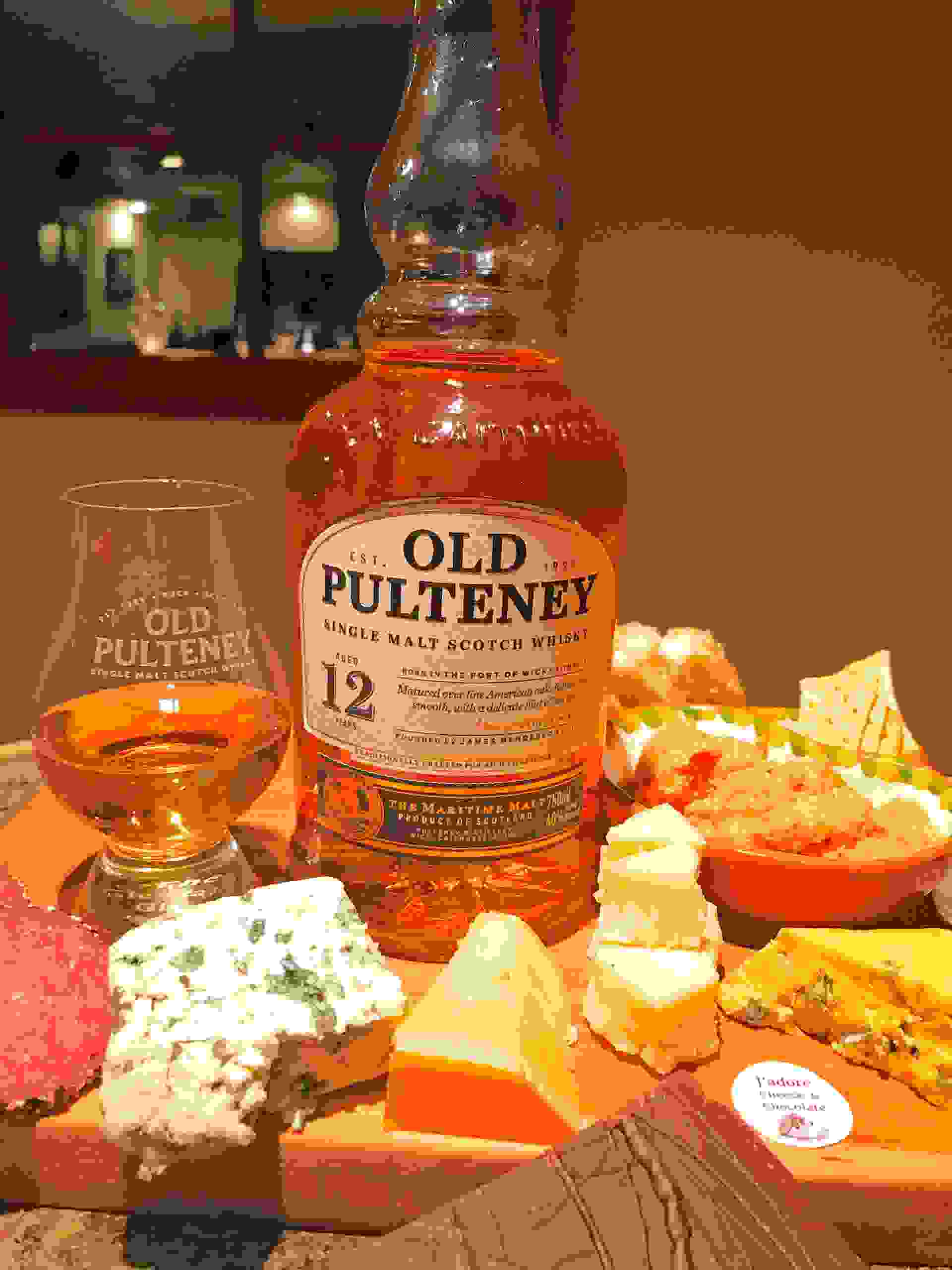 From the maritime town of Wick ...Old Pulteney 12

Old Pulteney was, until very recently, the most northern distillery on the mainland of Scotland.

This Highland whisky from the town of Wick, is matured entirely in American oak ex-bourbon barrels, providing a heavy influence of bourbon sweetness.

This Maritime Malt has matured for 12 years on the northeastern coast-line of Scotland, resulting in its aroma having a hint of briny sea air. A delicious pairing with smoked trout pate.

The taste is dry, medium bodied and smooth, with notes of honey and cream, faintly salty with a slight spicy note, wonderfully paired with Lindenhoff and Shropshire blue cheese! 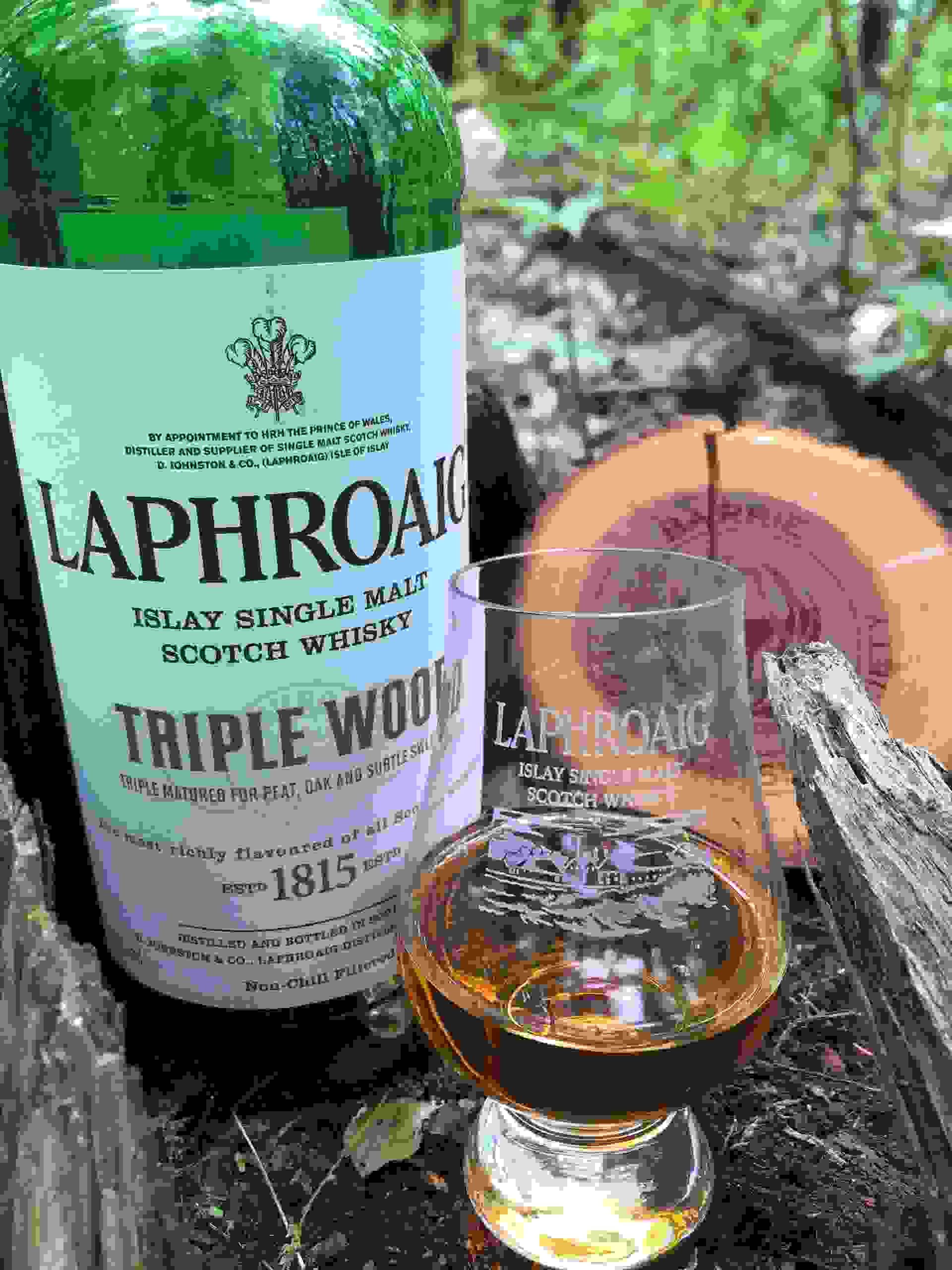 Laphroaig has received the Royal Warrant from the Prince of Wales.  The distillery identifies Charles by his title of Duke of Rothesay, as he is recognized in Scotland.

Triple Wood is an extension of the Quarter Cask expression.  This dram is special for its triple maturation process.  The result of which is a unique blend of its signature peat-smoked liquid, with softer notes of fruit and spices.  First maturing in ex-bourbon barrels, second maturation in quarter casks and then a third maturation in European oak casks previously used for Oloroso sherry.

This final stage allows for a slow maturation – all leading to a soft, complex and fully rounded flavour.

When tasted, Triple Wood begins with a subtle sherry sweetness graced with traces of Laphroaig's classic smoke. Offering up a sweet spiciness with hints of nuttiness and a huge peat flavour.

The palate is powerful, yet with a creamy consistency, followed by  vanilla and fruit and a suggestion of sherry sweetness. 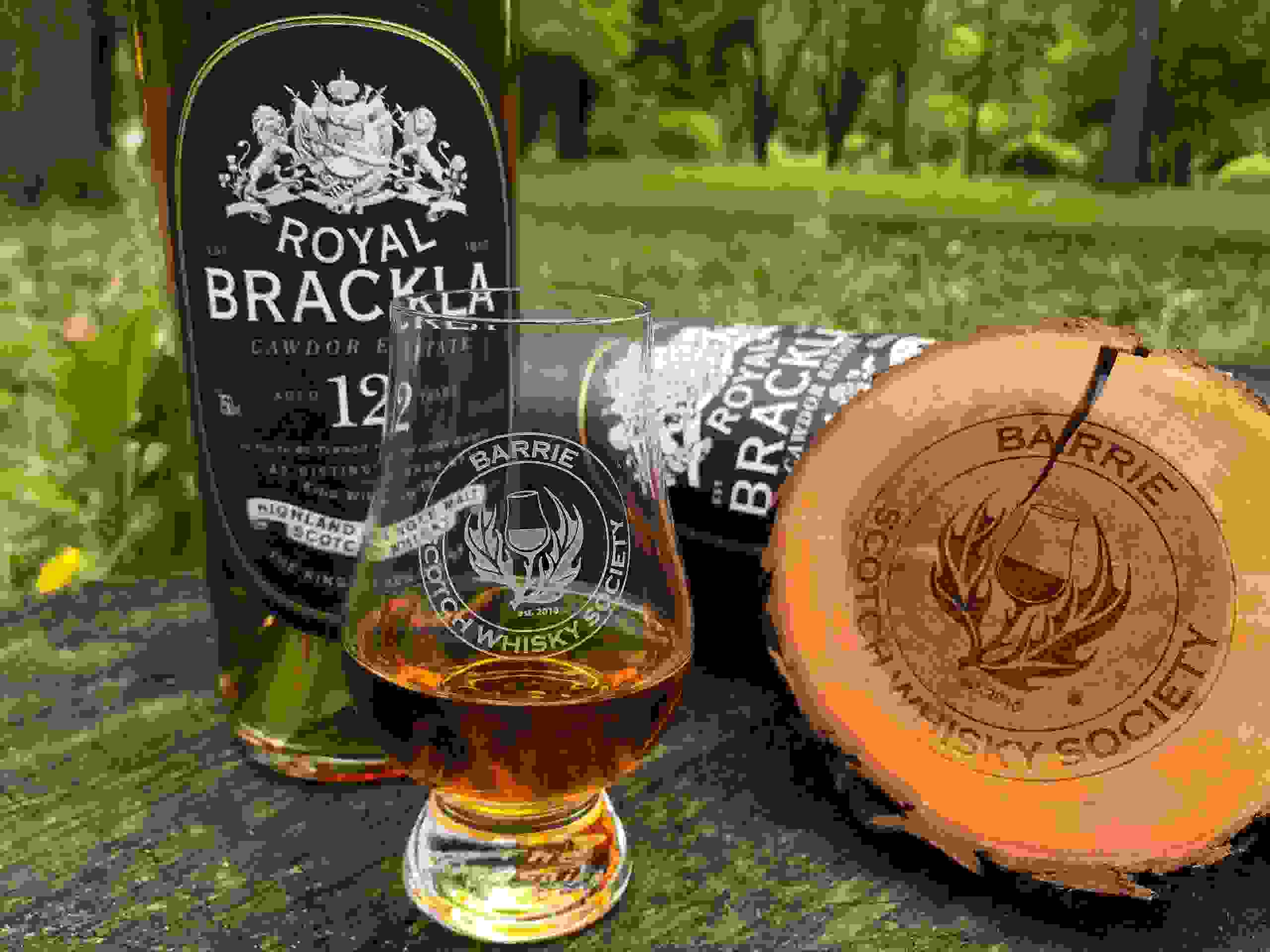 Royal Brackla was the very first Scottish distillery to receive 'royal' status when, in 1833, it was bestowed upon them by King William IV.

Most of the distillery's production goes into Dewar's blends, but as with other Dewar's distilleries, a single malt range has been launched as part of the Last Great Malts.

For the Royal Brackla, Oloroso casks have been used for a luxurious, regal feel and charming finish.

The colour in the glass is medium amber.   Aromas on the nose of toasted grain, ripe fruits, toffee and ginger; then warm and spicy on the palate, delightfully balanced; refreshingly dry and delicious on the finish. 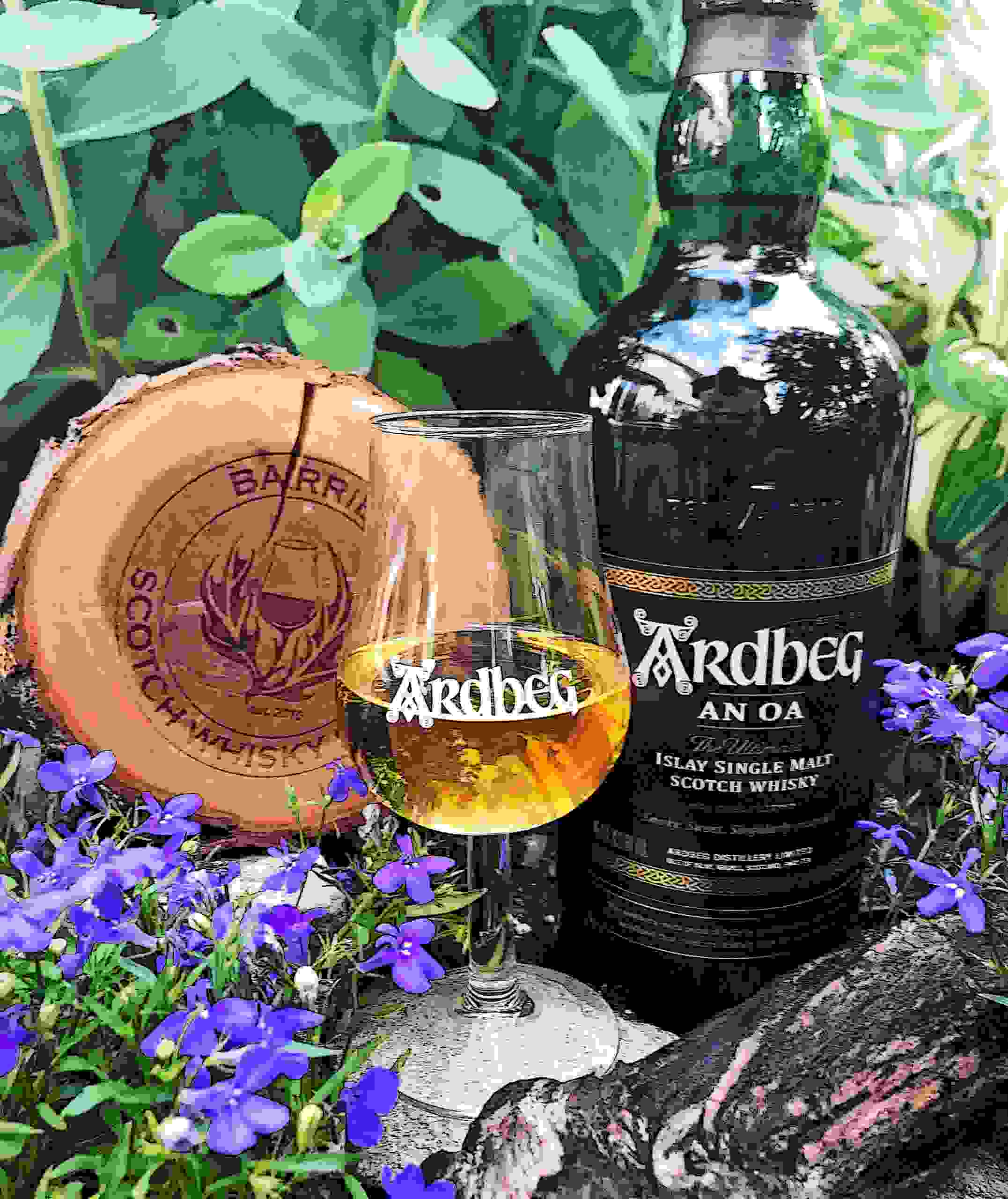 Ardbeg An Oa, pronounced “an oh,” is named after the Mull of Oa, in the south west corner of Islay.

This tasty dram is a well rounded expression, due to time spent in the customized French Oak gathering Vat. This unique vat is established to marry whiskies that have been maturing in Pedro-Ximenez sherry casks and bourbon barrels.

Ardbeg An Oa is more approachable than the 10yo but without losing any depth. Rich and smoky, with everything from rich coffee and chocolate, to fresh sea breezes.

This dram has a vibrant light gold pour.

On the nose is a classic Ardbeg fragrance of lime and brining notes, coupled with a suggestion of fruit flavours such as peach and banana.

On the palate a gentle sweet spiciness comes with a smooth creamy texture, filled with milk chocolate, toffee, nutmeg and cinnamon.